Update – Summer 2022: The town of Truckee, California is moving forward with their smart meter program. However, after significant pushback from the community, the Truckee Donner PUD Board has agreed to allow any customer to opt-out of the wireless smart meter program. The Board went from being unanimously opposed to an opt-out to being unanimously in favor after hearing resident’s concerns and testimony. This is a sane and wise decision. Thank you to the many Truckee residents who helped to raise awareness about the privacy, health, fire and security risks of wireless AMI smart meters.

For the past six years, the Truckee Donner Public Utility District (PUD) has wisely held off on installing wireless “smart” meters. Their managers have watched as utilities such as PG&E have come under immense public scrutiny for installing new wireless electrical “smart” meters that have increased electrical bills, damaged people’s health, started countless house fires and have invaded privacy.

You can stop this proposed “smart” meter system before it starts by sharing this information with the community and speaking out against this project. The citizens of Ashland and Eugene, Oregon spoke out and now “smart” meters are optional in their towns (with no fees to keep their original analog meters). The same thing has just happened in Port Angeles, Washington.

Around the world, people are demanding that “smart” meter programs be stopped. Here are the primary reasons:

Here is my TEDx talk about the wireless smart meter/EMF issue:

If you think it is impossible for people to be harmed by wireless smart meters, consider the following. Here is one of the most powerful utility commissioners in the United States and former CEO of the utility Southern California Edison, Michael Peevey of the California Public Utilities Commission, admitting in a 2010 email to a PG&E executive that they know people are being harmed by smart meters. 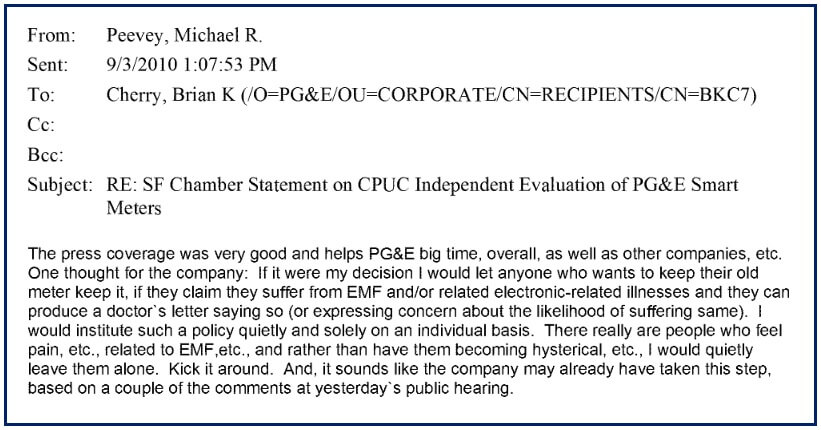 The following is a series of short 1-minute videos that explain the meter situation.

Video 3 – Wireless “Smart” Meter as deployed by utilities throughout the United States. The proposed Truckee smart meters will be very high powered (can send pulses that transmit your personal data for miles) and pulse between 10,000 and 200,000 times per day (not the 45 seconds the utility will say).

Note: The nearly continuous pulses from this wireless “smart” meter max out this measurement device (this is what the “1” means). The “clicks” are all bursts of microwave radiation from the “smart” meters that take place for the meters to communicate with each other. This is called the “wireless mesh network” and will fill this pristine community with another layer of microwave radiation (a Class 2b carcinogen – same as DDT & lead).

Video 4 – A new AMI Smart Meter installed in Truckee 2017/2018. The pulses heard in the following video are part of the ZigBee 2.4 GHz antenna that is meant to communicate with the “smart” appliances within the home.