“A new scientific truth is not usually presented in a way to convince its opponents. Rather, they die off, and a rising generation is familiarized with the truth from the start.”
– Max Planck, Originator of Quantum Theory and Nobel Prize winner in Physics

Most Important EMF Research to Date:

2016 NTP study preliminary results showing that cell phone radiation causes cancer and DNA damage in rats. This $30 million study is the gold standard of EMF research and makes it clear that our current wireless safety standards do not adequately protect the public. This 2018 study by the prestigious Ramazzini Institute in Italy has confirmed the tumor results of the NTP study (research paper found here). This 1992 study also shows cancer in rats from RF exposure.

Sperm damage was found in 21 of 27 studies reviewed in this 2016 meta-study. Multiple studies in this group also found DNA within the sperm. The mechanism is thought to be mitochondria dysfunction leading to elevated ROS production. This 2017 study also shows how low-frequency magnetic fields can increase the risk of miscarriage.

This 2000 report from the British Journal of Cancer states that low-frequency AC magnetic fields of 4 mG is the level at which childhood leukemia increases. Here is an excellent summary of research on the biological effects of AC magnetic fields.

2017 meta-analysis performed in the EU looking at 24 major brain tumor studies (24,000 cases vs 50,000 controls) shows a significantly higher risk of brain tumors after 10 years of mobile phone use.

2017 meta-analysis published in Nature showing an increase in headaches for mobile phone users.

German report on 878 Russian studies from 1960-1997 regarding the health effects of EMF. This report was buried by the German government as soon as it was published because of the consequences of its findings.

“Captured Agency” report on how the FCC is completely dominated by the wireless industry that it supposedly regulates. Published June 2015 by investigative journalist Norm Alster and the Harvard University Center for Ethics. Mr. Alster also wrote about the Dot Com Crash and the 2008 Financial Crisis before they happened. Click for free PDF or Kindle versions. 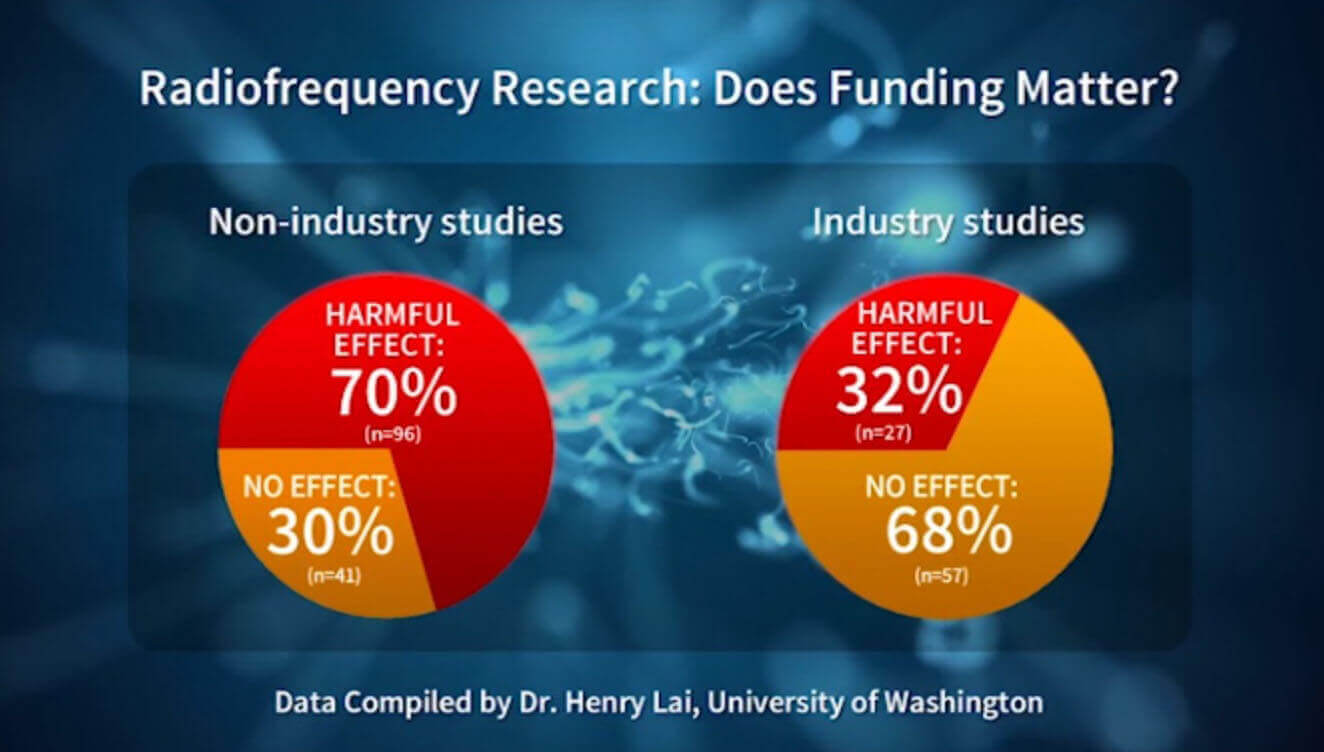 The above difference is not statistically possible without corrupted science.

2017 study showing 2.45 GHz WiFi significantly impacts the endocrine system of young rats, particularly the pancreas. The study showed that “serum glucose, lipase and amylase levels were higher in the EMR group, and the results were significant, indicating both endocrine and exocrine cell damage.” You can view the study results here.

2015 study showing that 2.45 GHz WiFi may be accepted as one of the major risk factors for brain tumors and other neurodegenerative diseases: Effects of 2.4 GHz WiFi on microRNA Brain Tissue

2015 study showing 2.45 GHz WiFi decreases sperm function. Researchers conclude that “there should be major concern regarding the exposure to Wi-Fi networks existing in the vicinity of our living places.”  http://www.ncbi.nlm.nih.gov/pmc/articles/PMC4503846/

2015 paper showing that polarized EMF (man-made) is much more biologically active than non-polarized EMF (natural sources such as infrared, ultraviolet and visible light from the sun):  http://www.nature.com/articles/srep14914 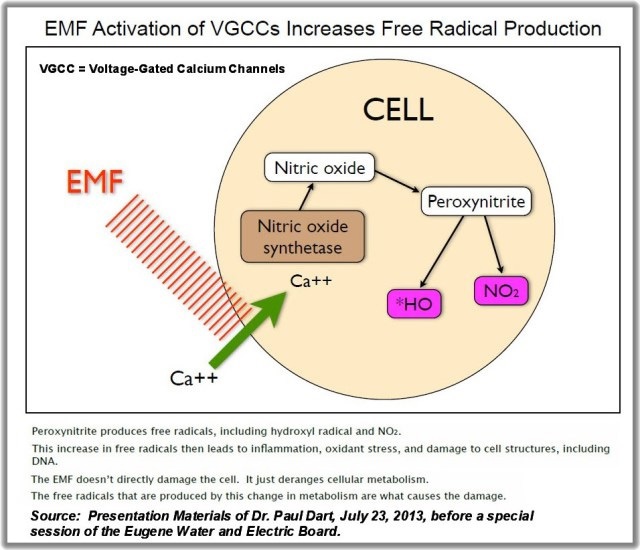 The above graphic shows the mechanism by which EMF can cause DNA damage without the heating (thermal) effect of cells. This mechanism was found in 17 different studies and is essentially a smoking-gun that shows EMF can cause serious damage at levels far below government safety standards.

2014 Japanese study showing significant decrease in clinical symptoms of building residents once the cell tower was removed from the location.

2002 letter from EPA stating that FCC guidelines do not cover long-term, chronic, non-thermal microwave radiation exposures (that which we are exposed to every day by consumer wireless devices). It confirms that FCC guidelines only relate to damage from heating (thermal) effects: EPA Letter Stating FCC Guideliness are only based on Thermal Effects

Nokia has held patents since 1998 that would reduce the irradiation of cell phone users – but did not utilize the technology: http://betweenrockandhardplace.wordpress.com/2014/10/20/former-nokia-ctos-multiple-sclerosis-and-nokias-patents-to-prevent-it/

This video shows the biological impact of FCC guidelines that do not consider non-thermal effects of EMF pollution.

Survey of 210 respondents whose health was harmed by smart meters: http://www.mainecoalitiontostopsmartmeters.org/wp-content/uploads/2013/01/Exhibit-10-Smart-Meter-Health-Effects-Report-Survey2.pdf

Graph with 67 studies that show health effects well below government limits and the corresponding effects of smart meters – See the following PDF, as well as the graphic: 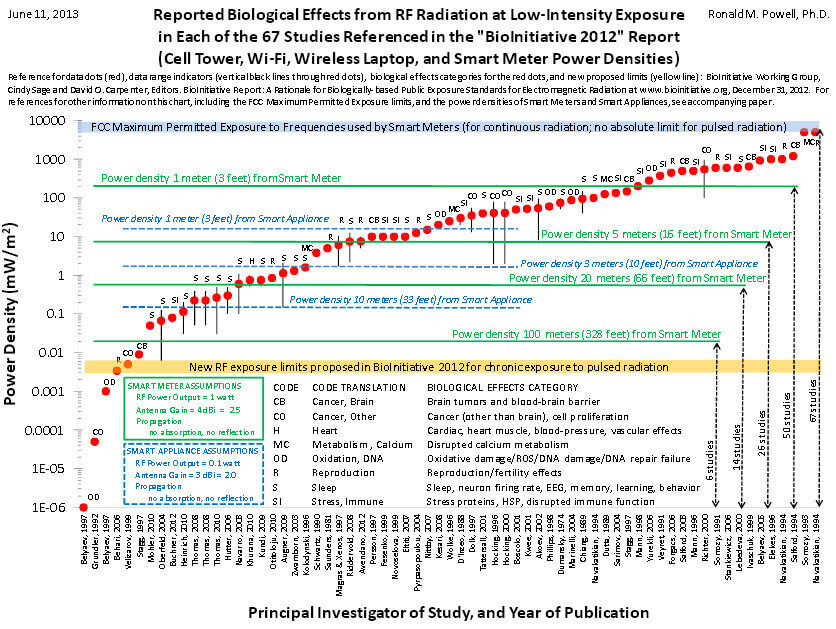 The above graphic shows that 67 peer-reviewed, repeated studies show significant health issues (e.g. cancer, tumors, infertility) at levels far below the government safety standards (gray line). The yellow line is what the standards should be if public safety is considered.

Brain cancer rates have doubled in Denmark the past 10 years: http://microwavenews.com/short-takes-archive/spike-brain-cancer-denmark

Thousands of studies showing links between EMF pollution and biological effects – studies are noted for showing effects or showing no effect: http://www.powerwatch.org.uk/science/studies.asp

A follow-up to the above study by the lead scientist can be seen here.

2016 Study showing that Nocebo response is not an adequate explanation of EHS in many cases: http://www.ncbi.nlm.nih.gov/pubmed/26369906   Read full study here.

Proposed statement on electromagnetic hypersensitivity by the European Economic and Social Committee:    http://www.iemfa.org/wp-content/pdf/EESC-TEN559.pdf

Children’s brains absorb much higher amounts of microwave radiation than adults because of their thinner skulls. Their nervous systems are also easily damaged by EMF because they do not yet have the protection afforded by nerve cell myelination.

Use of fluorescent lighting leading to an increase in eye disease in developed countries:  http://www.ncbi.nlm.nih.gov/pmc/articles/PMC3222423/

Bee Colony Collapse Disorder (CCD) can be partially explained by the increased microwave radiation in our environment from wireless technologies the past decade – a new study out of Switzerland.

2021 study showing that pesticides and EMFs play a role in honeybee decline.

2021 research paper on the effects of EMFs on flora and fauna by B. Blake Levitt. 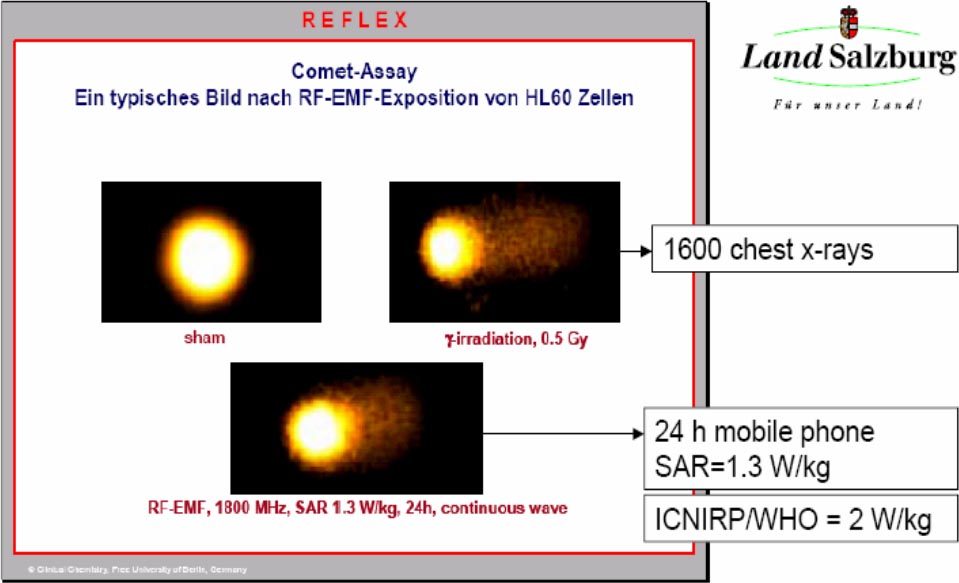 This study from Austria shows that 24 hours of mobile phone radiation causes as much DNA damage as 1,600 chest x-rays. The results were so damaging to the wireless industry that the scientist, Dr. Franz Aldkofer, was attacked from many angles. The results still stand though.

This presentation by Dr. Martin Pall in Norway November 2014 shows that our understanding of the health effects of weak EMF’s is about to completely change.

The following are some of the top organizations in the world working to protect humanity:

This website will help you quickly reduce the electromagnetic (EMF) pollution in your life. It is the only EMF resource on the internet by an electrically sensitive engineer that has over a decade of experience working directly with thousands of electrically sensitive individuals. My goal is to give you the most practical and effective EMF advice possible. Learn More